This past weekend I went to see The Hate U Give. Seeing that movie left me with raw, unfiltered emotions. They talked about several subjects. Modern day racism and people’s inability to see themselves. The modern black family. Loyalty to your roots. The “snitches get stitches” culture. How black kids are taught to behave during police interactions. Hatred received for being a black a cop. How black people are conditioned to see their own. The idea of “not seeing color.” Interracial relationships. Code switching (changing your vernacular around different groups of people). There was so much to unpack. I honestly couldn’t write this without stepping back and thinking with a clear head. My raw emotions would have taken over.

I can relate to most themes in the movie, but the one that struck a major chord was being the safe black person.

I’m the “safe black person.” Let me tell you what it’s like.

Being the SBP means your white friends (those who think like this) don’t see you as a threat. You all can talk, laugh, and enjoy one another’s company. You believe you all have a bond.  Until a matter of race comes up. Then, you see their true colors.

Being the SBP means white people can tell you how they really feel about race and expect you to understand because “You’re not like the others” or “It’s a joke!” Because I encourage discussion, I hear all types of off-base views on racism and I’m expected to understand. I’m asked “Why are black people so angry?” I’m told “I just wish this race stuff would stop! I don’t see color! We are all HUMAN!” while ignoring the race stuff they speak of they don’t experience. My experiences with racism are justified a thousand times over. I’m lectured on why Colin Kaepernick is disrespectful of vets. Why Black Lives Matter is a lie. Why President Trump is trying to unite the country because President Obama divided it.  I’m told Michelle Obama is classless. Etcetera. Etcetera. Etcetera.  The other day I mentioned the danger in President Trump identifying as a “nationalist” and ignoring white nationalist ideology. That is a danger to me given the history of the Klu Klux Klan and it’s reformation into professional white nationalism. The response? “You can be a nationalist and be anti-hate groups as well.” Totally not the point, but being a SBP means people ignore what doesn’t apply to them so they can “educate me.”

I have so many examples of being the SBP growing up in North Dakota. From people saying they “nigger rigged” something in my presence to calling me the big black man as a nickname to comparing me to every big African-American male that comes to mind. Those events irritated me, but I didn’t understand their full context when I was younger.

Now I get it. Especially with the epidemic of unarmed black men being killed by the police. 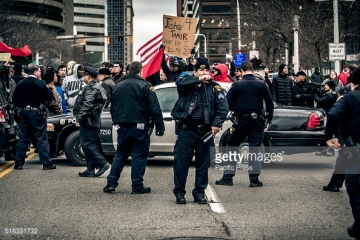 When Michael Brown was killed by former Officer Darren Wilson and the Department of Justice shrugged their shoulders, I was angry. When Trayvon Martin was murdered by George Zimmerman and he was acquitted, I was angry. When supporters of Zimmerman  eviscerated Rachel Jeantel for her manner of speech, I was appalled.  When Tamir Rice was shot within seconds of police arrival and the DOJ turned their head, I was angry. When Eric Garner was choked to death, I was angry. When Sandra Bland was found inexplicably dead in her jail cell, I was baffled. When Terence Crutcher and Alton Sterling were shot, I got angry again. By the time police killed Stephon Clark in his backyard, I was tired. Tired of seeing black bodies strewn in the streets. Tired of the endless excuses why black people being killed is justified or a false narrative. Tired of being questioned about black on black crime. Tired of people trying to be smart in their ignorance. Tired of the arrogant “Fix your community and then maybe I’ll listen to you” perception. Tired of continuously being told my life doesn’t matter by the judicial system. Tired of supposed friends explaining why that same system is always right. Tired.

Some of my white friends couldn’t comprehend why I was so angry.  Some of them still don’t understand. Some of them won’t ever get it. They can’t fathom me ever being in an altercation with police. They don’t see the glares I get when I walk in the mall, women clutching their purses, moving their kids away from me. Since I’m the SPB, I’m not like “the others.” These same folks lecture me on why I should change my thinking. Or, why I should approach the subject of race differently.  I shouldn’t be so abrasive. Not everything is about race. Etcetera. Or, they flat out distance themselves from me completely.

That’s what happens when you stop being the safe black person.

A point that was reinforced from The Hate U Give is to be yourself. If you try to adjust to everyone’s expectations of you, then you won’t know yourself. I know who I am. Even when you don’t agree. Regardless of how you see me.

Nice to meet you.