It’s been an emotional week.

If I thought people were nasty before the election, then I surely was not prepared for the storm of ugliness that awaited me after the election results. Personally, my emotions were all over the place. Anger. Sadness. Dejection. Disbelief. Numbness. I was even on the verge of tears. It wasn’t because Hillary Clinton lost. It’s because the man who represented hate his entire campaign won. It’s because America told me, yet again, that people of color really don’t matter. I shouldn’t be surprised. I mean looking at the history of the country Donald Trump being president is par for the course.

I, like many others, sounded off on Facebook. I know it’s useless. Especially being that I live in a red state. There was no way Hillary Clinton was going to win in North Dakota. However, as I told one of my friends, I can’t get down with a president that thinks I’m jobless, uneducated, and poor with my skin color being the qualifying characteristic. I just can’t do it.

I’ve since settled down about it. If you’re saved, then you’ll truly allow God to take the feeling of hopelessness away. Your hope remains in God and therefore you’re at peace. However, Americans have not settled down. The country is angry and it’s showing. A lot of people don’t understand why others are angry.

President-elect Trump ran his campaign based on fear, bigotry, and stereotypes. He did that because his target audience had certain beliefs. Some people voted for Trump based on his policies. They want stronger borders. They don’t like the Affordable Care Act. They want a president that would not take their hard earn dollars and give to people on the system. They believe in law and order, and not the circumstances surrounding each situation. Some of these people also had feelings in the mix. They felt forgotten about for eight years. Their voices weren’t heard. Now, a good majority of them were white people. A large portion of the silent majority is white. However, Trump received a sizable portion of the African-American and Latino vote. Thus, it’s quite feasible that most Trump supporters did not vote for him based on racial analysis. They truly feel in their hearts race had nothing to do with their decision. 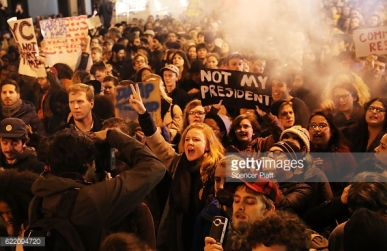 But, in some ways, racism and prejudice had a lot to do with it.

It’s one thing to say “I want stronger borders for our nation.” That’s absolutely fine. Illegal immigration is an issue that needs to be addressed. It’s an entirely different ballgame when the statement is, “When Mexico sends its people, they’re not sending their best,” he said. “They’re sending people that have lots of problems…they’re bringing drugs, they’re bringing crime. They’re rapists. And some, I assume, are good people.” Why is this different? It’s a blanket statement. It stirs up feelings of angst against the entire Mexican population or those who look like they may be Mexican. It creates a divide between those who want illegal immigration addressed and Mexicans.

That is prejudice in a nutshell.

This same goes for African-Americans and Muslims. These groups were marginalized by comments made from President-elect Trump. Of course, black people are not strangers to this treatment because America. However, since 9/11 Muslims and Middle Eastern people have been subjected to the scrutiny of the American people. Now, I don’t agree with the Muslim faith in any way. However, that doesn’t mean I’m going to treat you as any less of a person. Jesus told me to treat people right. That’s what I’m going to do.

This is why people are angry.

The candidate that showed no love for a lot of people is the face of our country. If you voted for him, then you were able to bypass who he’s shown himself to be. You were able to bypass “locker room talk”, and stereotypical statements of your family members (and even yourself). It doesn’t bother you that the candidate is disrespectful. Why? I don’t know, and that’s your choice, but understand  why people are angry.

At this time, it’s time to get over the anger. It’s time to unite as one. If love truly trumps hate, and it does, then those of us who were hurt by this election must show grace in defeat. Understand that we are not defeated. Our president, regardless of who it is, cannot stop us from individually loving one another. We must set aside our differences and see the good of this. We must rise above.

We will rise above.